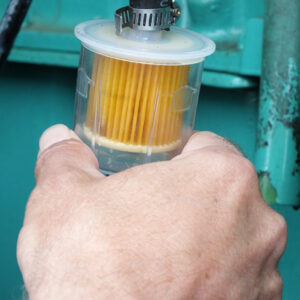 OptiFuel™ is a concentrated fuel additive comprised of a fuel-soluble carrier containing several catalysts that, combined, act to improve combustion efficiency and reduce emissions. OptiFuel can be blended with fuel at any point from fuel manufacturing to the end user filling their vehicle’s tank.

OptiFuel is suitable for use in gasoline, gasoline/ethanol blends, diesel, biodiesel, diesel/biodiesel blends, and residual fuels such as bunker fuel.  It can also be added to fuels such as wood chips to improve BTU values and reduce emissions.

During fuel combustion in a closed system such as an engine’s cylinder, activation energy is not recoverable as work output, so a reduction in activation energy during fuel combustion translates to more system energy available to do work.  This is commonly seen as an improvement in torque with a concomitant improvement in Specific Fuel Consumption (SFC), which is a measure of the amount of fuel needed to perform a specific amount of work, such as moving X mass Y distance.  In the case of generators, SFC is usually measured as the amount of fuel needed to generate a kilowatt-hour of energy.

Because SFC is improved, less carbon as Carbon Monoxide (CO) and Carbon Dioxide (CO2) is emitted when measured against work performed.

The catalysts provided during the combustion process also contribute to the reduction of carbon emissions measured as soot or Particulate Mass (PM) in engine exhaust due to improved combustion efficiency.

OptiFuel also has catalysts in it that work post-combustion to reduce emissions. The catalytic process by which OptiFuel reduces NOX and SOX is similar to Selective Catalytic Reduction (SCR) units. That said, OptiFuel does not have the same shortcomings that SCR does, where SCR only becomes effective once the system reaches a sufficient temperature for catalysis to occur, which is typically between about 250°C and 430°C. OptiFuel also is not subject to catalyst “poisoning” (a reduction in catalytic effectiveness due to reaction with chemicals that impede the catalytic effect). Nor does the user have to be concerned with about thermal cycling breaking down the physical structure of their catalytic converter over time. This is because the active catalysts are being continually supplied in the fuel.

OptiFuel does not change the characteristics of the fuel it is blended into, so a fuel that meets national/international fuel standards prior to blending with OptiFuel still meets those standards.

Generators of varying size that have been tested to determine the effect of OptiFuel™ on them in terms of reducing the amount of fuel required to produce electricity as compared to untreated fuel.

In order to help alleviate some of the expense of creating and maintaining ventilation shafts, while still meeting air quality regulations, a global mining company tested OptiFuel™ in equipment that was regularly monitored for emission levels.

OptiFuel™ has been tested in a variety of diesel, biodiesel, and gasoline-powered personal, passenger, and commercial transport vehicles.

Three diesel-powered barges carrying goods in the Netherlands and a large transport ferry running between Greece and Italy were tested for the effect of OptiFuel™ on emissions as well as fuel economy.

The following provides information regarding the composition of OptiFuel™, how OptiFuel works, what effect it has on the physical characteristics of fuel it is added to, and what it can do relative to other common fuel additive types.

OptiFuel™ was tested by Innospec, a world-leading manufacturer of fuel additives, to determine whether its use would harm engines.  At the time it was called OptiDiesel. Testing indicated that fuel economy and emissions for other fuels besides diesel were also improved. The name was then changed to OptiFuel to reflect the broader range of fuels it could be used in, but the formulation remained the same.

OptiFuel was invented and developed by Clean Air Technologies, a division of Green Earth Naturally, LLC.  OptiFuel™ was initially released in the US market as OptiDiesel, but diesel-powered engines are not as popular in the US as they are overseas.  Therefore, the decision was made to temporarily exit the US market and move our testing, production, and marketing efforts to the European Union (EU) and other countries where diesel engines are more widely used.  OptiFuel™ was released there under the trade name Ultimum5.

While being tested overseas, it was found that OptiDiesel worked well in other petroleum-based fuels besides diesel.  Now it’s being released again in the US, but as OptiFuel™ instead of OptiDiesel.

Take a few minutes and watch these testimonials from real people that are either using OptiFuel™ (as Ultimum5) or testing emissions while in use.

**Disclaimer:  Per the Code of Federal Regulations, specifically 40 CFR 79, OptiFuel™ is only legally allowed to be sold for use in motorcycles ridden on public roads; in stationary engines such as would be found in generator sets; in off-road equipment such as tractors, mining equipment, ships and boats, and other heavy machinery; or on vehicles used solely on private property.

OptiFuel™ has not been registered for use in vehicles operated on public roads per 40 CFR 79.  For that reason, Green Earth Naturally does not condone the purchase of OptiFuel™ for use in cars and trucks driven on public roads except during testing for effectiveness pursuant to the aforementioned regulations.

Green Earth Naturally, LLC disavows the use of OptiFuel™ for purposes other than its intended legal use as outlined above.